Within reason, users are free to choose their usernames freely. There are restrictions where names are potentially offensive, and 'we' have tended to avoid allowing those which might be misleading (notably 'moderator', 'LaTeX', etc.: a few very general terms). On the chat, the question arose about having promotional 'information' in user names.

General network policy allows for advertising in usernames, with the proviso that these might be blocked in some jurisdictions if they are for example political in nature.

Here, I'd like seek views on to what extent 'promotional' elements in usernames are welcome. This might be for example the name of a user's website, the name of another technical website or even a completely unrelated website/product.

I normally speak names in my mind when writing, and addressing furniture, numbers, random letters, long sentences, political statements, names written in scripts I don't understand, names containing too much "z" or the umpteenth "Guest" or "Anonymous" is odd. So I have a clear preference for names that are not too long, pronounceable, recognizable, and feel like real names of real people.

But I don't see a need to make a rule out of my preferences. If other people can bear with occasionally duck or bear outbreaks, then I can bear odd names. If someone wants to be known as an url address it's their choice. I would only put a line at clearly offensive names.

Btw: I know that my first name is a bit of a challenge to pronounce for non-german ;-)

I'm the lead developer of TopAnswers, and I'm responding here as my name has come up in the comments, and because I want you to know that it makes a difference to me that you, and/or one other another moderator here would rather my name did not advertise TopAnswers.

I'm not saying I agree with your reasons, or the method of trying to shape (or gauge) opinion here, but I was a moderator for many years on dba.se so I know that it's a tough job. I have no wish to make yours any tougher, without a very good reason. So I've changed my name here (and on SE generally) back to "Jack Douglas" and will keep it that way. I gently encourage others to do the same, though of course they may do as they please, I have no position here or indeed anywhere else, to tell anyone what to do.

I have to admit I am impressed/surprised that the advertising bothers anyone at all, but I suspect that is less down to the TopAnswers 'name' in particular, and more down to the prolific and brilliant contributions of certain users active on both sites (of course on SE there are many other great contributors I do not mean to suggest otherwise — and I imagine that now this has become an issue, they would prefer not to have this friction ongoing, so I write this post out of respect for them too).

Best of luck with tex.se for the future — and I hope you continue to get full support from the SE network. If that ever changes…

There are two issues here:

Note that if I choose a username @yoyoyoyoyoyoyoyoyoyoyoyoyoyoyo, it has the same appearance problems as any long name. This clearly shows that the two issues are perpendicular to each other and they should be discussed separately and policies made separately.

For the first issue, the answer by animuson at https://meta.stackoverflow.com/a/349167/1161631 that Joseph mentions seems to cover this with saying that it's allowed to be promotional in the username.

For the second issue, there's ---either a missing limit on the username length, or--- an UI issue with the username being displayed in its fullness and without any visual clue when you @-mention someone, both in chat and in post comments. update: its was pointed out in the comments that there is a 30-char limit; still there might be the UI issue.

Let's do some examples.

awondefullink.com is a site that sells something --> no good, it is spam.

awondefullink.com is a site about TeX/LaTeX, totally no profit --> why not?

Sincerely, I can't understand where the problem is, it is enough to use common sense.

My sincerest apologies: Sometimes(?) I lag behind when it comes to looking through internet communication practices that are new to me.

Before reading this question and the answers to it, I thought that these usernames, which included phrases like "Likes Topanswers.xyz", were subtle messages, requesting high quality answers in good spelling, and probably were more or less subtly conveying the account-holder's impression of the general quality of answer-posts in this forum. I thought this might be a little extravagant and did not care much about it.

It's a good thing that I finally know that these usernames are meant differently - namely as an advertisement for some website.

These statements do not answer the question.

They are intended to draw attention towards the circumstance that messages conveyed in terms of rather short usernames can be misunderstood.

Thanks @JosephWright for posting! I add my opinion. Quite frankly :-) other opinions welcome.

It's about abusing the name feature for transporting an advertisement, by a single setting that's creating many (thousands) ad copies.

Free speech is most important.

We are free in choosing our user name. Using that freedom for web site promotion is a danger for that freedom. Once users such as @user_likes_viagra.com or @user_is_at_bitcoin.cc (fictional addresses) appear visibly, our free choice of user names may be questioned.

Just take a look at the chat of today and see if it's good for conversation to have full URLs in user names in each of their messages and the replies to them, running since some months that way.

So I suggest not to exploit that loophole of putting a web site URL into a user name to reference it in any question, answer, comment, and chat message the user participates. It's like using a tool for automatically adding a URL to any (actual) speech done.

edit: For better understanding, this is, how the TeX.SE chat looks theses days, taken from the discussion that led us here, I highlighted the URL in Firefox to make visible how speech space is taken and what my brain has to skip each time, while living with the awkward grammar/sentences as result of combining with _is_at_longURL and likeslongURL: 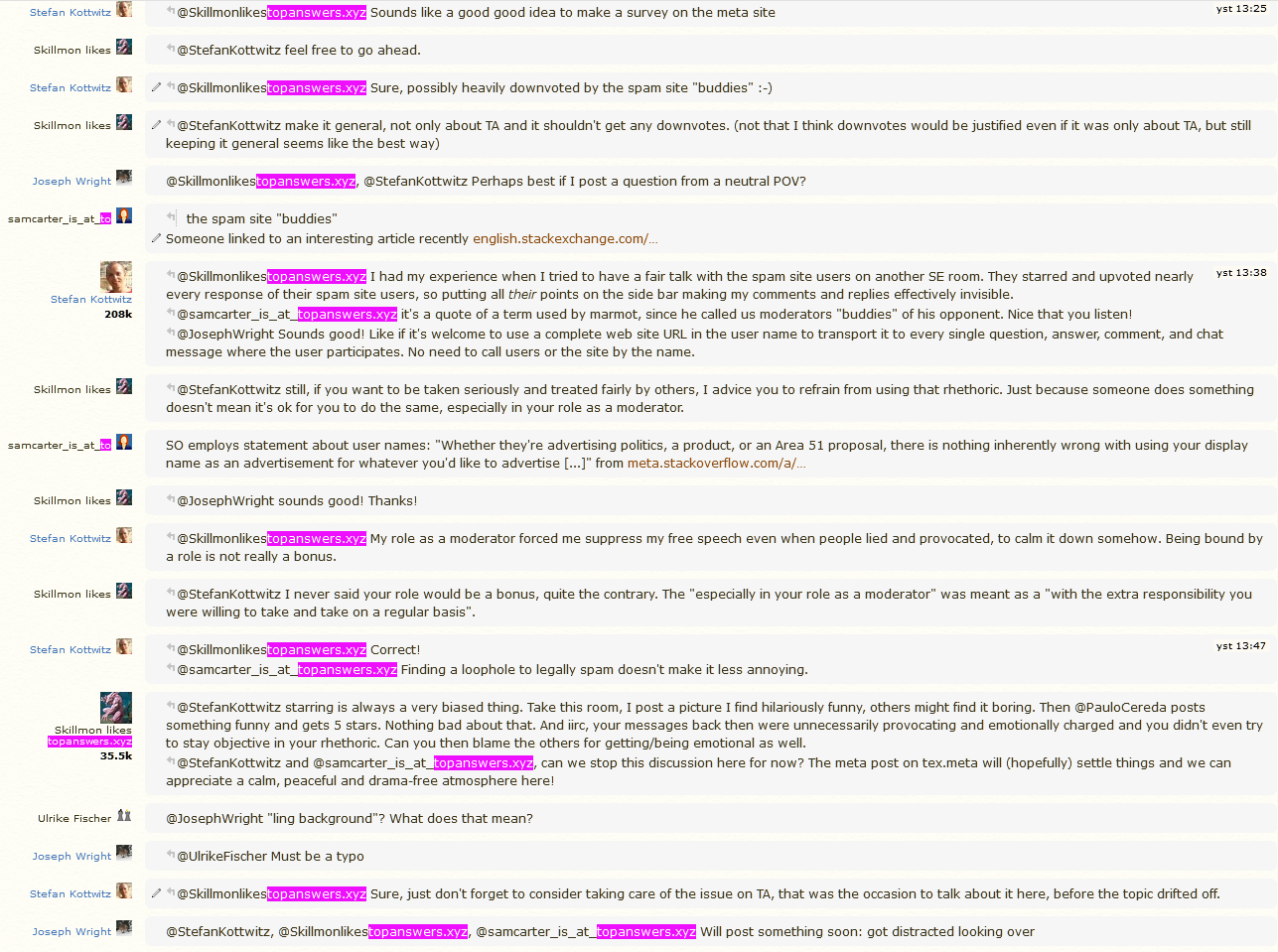 An irony is, that the URL is rarely shown on the names in the left side, but those longish statements are automatically inserted when I reply to people, that's why you see me involuntarily repeating the web site name here.

Sorry I don't have other web site promotion in name examples as this is the only one I know as currently happening. And I want to show how the actual effect in chat looks like. I would like to show something like kind of a @user_likes_viagra.com example but that spam doesn't happen. I show this to explain my point about web site statements in names and chat handles in general, as in the beginning of my answer.

It's a 5 months ago planned promotion. Now, see my screenshot above, it affects the TeX.SE chat experience too much for me. Not only that promotion text copies are there sometimes piling up.

It may be commercial promotion, political promotion, religious promotion, or yelling about persons or communities one does or doesn't like.

It's not the intended us of the name feature. This and the sample depiction is just my opinion as contribution to the views.

edit: Advertisement is ongoing, and more than a month later, our TeX.SE chatroom still looks like this (color highlighting by me): 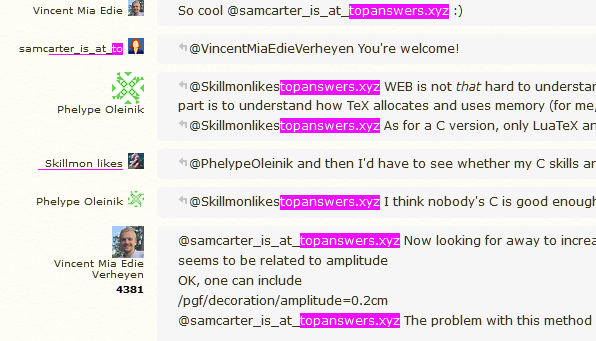 (No) thanks for using your freedom to continuously put your advertisement straight into our face.

Not the answer you're looking for? Browse other questions tagged discussion user-accounts .

190
Text building blocks
55
TeX.SE really are nicer voters
7
Unusual user names
9
Would it be OK to reference the existence of my LaTeX book in my name on this site?

16
A consolidated 'recovering material from a PDF' question and answer?
20
Formatting in quoted material
5
Prevent usernames like “user1234“