In these days I have asked myself one question:

how many are the total users of TeX.SE? 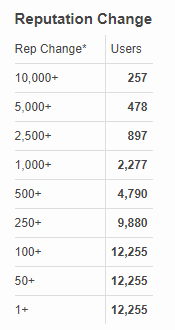 From the tables that I am attaching I do not see any global number.

One global number in that list is the 179,089 users with 1 or more reputation (you can't have less than 1 reputation).

Another way to look at it is to check the user list, note that it has 36 users per page and 4590 pages, which amounts to (a little less than) 165,240 users. I suspect unregistered accounts aren't listed here, hence the lower number.

The Stack Exchange site list lists the number of users on each site, and for TeX.SE it gives 179k:

The Stack Exchange Data Explorer says it's 178,499, but SEDE is updated once a week on Sunday morning, so it lags a bit.

Finally, the Stack Exchange API says the number is 179,092. Very similar to the one from the reputation leagues, but probably less prone to caching.

Not the answer you're looking for? Browse other questions tagged discussion statistics .

14
Policy on migrating questions from another StackExchange site?
10
Site usage statistics
9
The number one FAQ: Figures and tables are not placed where they are specified
18
Closing questions as exact duplications: 'best practice'
24
TeX.SE around the world
26
The Erdos graph for TeX.SE
13
Self-Assessing Answer Quality
11
Can we flag unnecessary/useless edits?
61
Why do (top) users on this site have such high reputations?