It happens that I edit my own answers.

My edits/changes often do not refer to the code that I present in my answer, but refer to the text passages in which I (try to) explain this code.

Would it, if so, be good practice to note explicitly within the edit summary that one has not changed the presented code?

Would it, if so, be good practice to note explicitly within the edit summary that one has only changed code comments that are not carried out in any way (the remarks behind % in (La)TeX-code)?

The reason why I think about mentioning explicitly that none of the code presented in the answer was changed is to indicate that the changes do not imply that those who use that code in their own work need to take action.

More generally speaking, what kind of (meta-)data would prove useful within in the edit summary?

Any advice for writing good edit summaries is welcome.

I used to be concerned with writing an edit summary, but have since only used it sparingly. The only time I write something is when I think the edit itself won't explain what was done.

Why? Every user is able to view the (edit) history of a post - just visit <site>/posts/<postid>/revisions. That history shows a side-by-side change of what was done to the post in the event of an addition/removal; retags just show the relevant tags and their changes. Take, for example, my edit (revision 27) of the LaTeX Editor/IDEs big-list post: 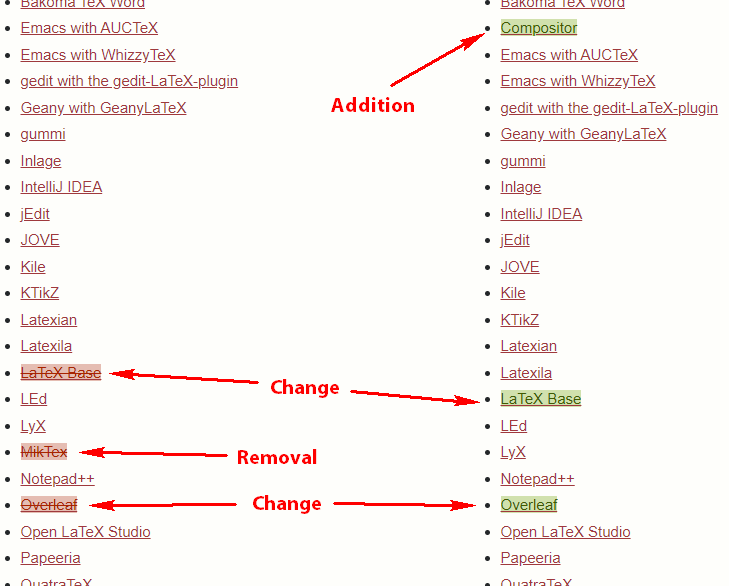 On the left is the post before the edit. The right shows the post after the edit. Additions are highlighted in green, while removals are highlighted in red. A change is considered a removal and an addition. In this case I removed the personalised links in lieu of generic post links due to the post being a community wiki. Since I didn't add an edit summary for these changes, it was marked what an automated "added 35 characters in body." Moreover, it often feels superfluous to say something in the edit summary that is directly visible in the edit history. For example, this edit to one of the answers in our ever-growing and awesome list of Often references questions states the obvious.

The above example(s) aren't meant to discourage edit summaries. Instead, it shows that the site functionality already supports some logic for those who are knowledgeable about their existence. And, if you missed out on the perfect edit summary, consider leaving a comment in the post thread referencing what and why you did what you did. That sometimes help motivate ones intentions (since there is some additional, yet limited markup support in comments).

If you're using the SOX browser extension/user script, you can have routine edit summaries be part of an option (under the top bar Help Centre > SOX: Edit Reasons). Here, for example, I'm adding a "removed thanks" option to summarise when I've removed someone's thanks/signature from their post: 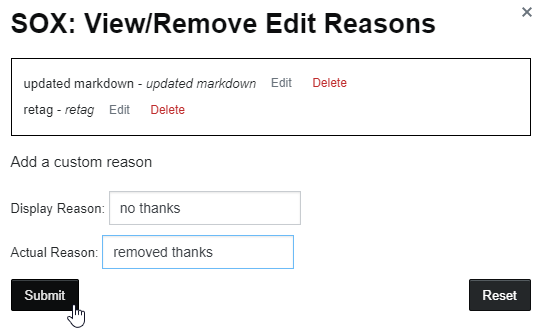 These show up under the edit summary that you can then check as/if needed:

Not the answer you're looking for? Browse other questions tagged discussion editing edit-summary .

22
How to edit your own answers
16
Is it good practice to share your personal work after receiving the answer?
2
What if an answer is good but not completely usable?
9
How can we improve the "quality" of questions so a search for information is more reliable?
19
Answer deleted by moderator because "not good practice"