I am quite new to TEX.SE, and I'm doing my best to reply to the posts I can and help out. Recently I noticed some edits being rejected, some of which I may understand, but then there's others which I can't wrap my head around, like this one: https://tex.stackexchange.com/review/suggested-edits/166987

The reason provided makes it sound like vandalism (those who edit Wikipedia may have heard it as reason for reverting edits), but in my opinion if you look at the "rendered output", my edit makes it so much easier to read, also there were mistakes in the mwe which made it fail when compiling.

I'm trying to understand in order to improve my future edits according to community guidelines. Thanks for any clarification!

Disclaimer: This is purely speculative, only the reviewers will be able to tell why they rejected this edit

This is how the start of your suggested edit looks like in the (markdown view) of the review queue: 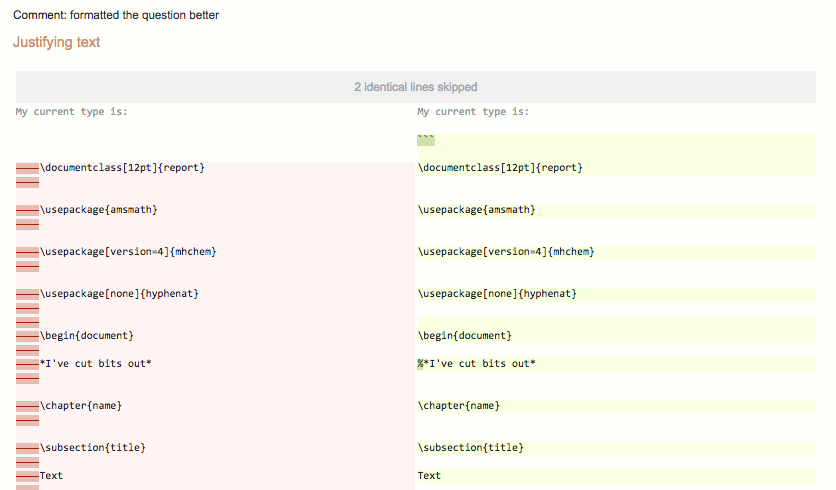 It clearly is not, but at the first glance this might actually look like vandalism to long time users, because the syntax of marking code blocks with ``` was only added a couple of weeks ago and before that the removal of the indention would have completly broken the rendering of the post (in fact many users might actually not yet know about the ```, because afaik there was no formal announcement about this new feature other than accidentally reading about it on main meta).

If this is indeed the reason for the rejection, this would also explain https://tex.stackexchange.com/review/suggested-edits/167032

Minor points which might have also influenced the decision:

TeX.SX is not considered to be a forum but people can post questions and answers. Today, and especially in such sites that many people are living a big part of their life online helping other people (or not), each one of such users have an online identity connected with their nickname (and some times with their real identity out there).

People who spend so much time online being active users with posts and comments etc (and not just reading posts or just been logged in), is at least simple logic that they are interested a little bit or more about this online ID.

So, changing many things on a post, is always a risk to make unwanted changes from the original poster. For example a rephrase of a sentence could improve its English grammatically but also could be using such a formal language that the original poster would feel sick about owning that post. (Just an example to make clear how careful we should be on editing and not just reformatting a post).

This is my general opinion and it is not specific to the linked rejected changes.

About the linked rejected changes, on the "language" changes, I already gave a reason above but it is not specific to your post since I already read it three or more times to understand it and try to find if there is an improvement on it (not good enough English -I mean my English-).

So, my final answer is that we should be really careful with changing something more than the format of a post without being absolutely sure that this edit is not just improving the question/answer but is also acceptable by the author.

Personally I would have skipped this edit because of the "language" changes and would have leave it to the others to accept or reject.

Not the answer you're looking for? Browse other questions tagged discussion support editing .

10
Improving editing suggestions etiquette
17
Why were my edits rejected?
17
Dealing with anonymous edits
8
Not getting reputation points for suggested edits
51
Reviewers; what do you eat for breakfast?
8
Why `Community` user automagically edits an answer?
19
Proposal to add "academic honesty" to the code of conduct