How to set up viewing preferences to automatically exclude postings of certain specific users?

Question: Is it possible to set up a user-specified "ignore list" not based on the postings' tags but based on who posted the queries?

Some background to this question: While this site is, overall, remarkably free of trolls and spammers, once in a while a user persists in posting poorly phrased and unclear questions -- and then is remarkably very quick to respond aggressively and challenge anyone who dares to point out that their postings are less than clear with over-the-top aggressive language. Such a user frequently has no qualms of accusing anyone of trolling, bias, lack of decency, and worse.

I've learned the hard way that trying to engage such users politely and attempting to have a productive discussion is utterly useless. Indeed, such engagements should be avoided entirely as they meet the criterion of the (originally Italian?) piece of advice, "Don't wrestle with a pig -- you get dirty, and the pig enjoys the wrestling match."

Ideally, there should be a method to enable me (and others) to place all queries posted by pig-type users on an "automatic ignore" list. Does this site provide such a method, or can it be created without too much knowledge of html programmming?

I would find some kind of ignore/mark user functionality incredibly helpful primarily to make enforcing my personal do-not-answer-to-this-one (to use the the nice name @CarLaTeX invented) list easier, which is important because this is the only real lever(*) I have for users who (in my personal opinion) do something wrong.

(*comments and downvotes don't really have any effect, they are often just ignored)

Why an ignore/mark functionality cannot be replaced by moderator actions or bans?

This clearly shows that not all behaviour that (in my personal opinion) is incorrect behaviour of users is something that mods can help. Not accepting answers, ignoring comments etc. is all perfectly in agreement with the rules of this site, it is just something I personally don't like and I think the other options provided by the site (commenting and voting) are not as strong as not answering questions of this special kinds of users.

Luckily this only affects a tiny fraction of the users. From the 145 000 users of tex.se I have 22 on do-not-answer-to-this-one list

22 names sounds not so much, but with cryptic user names like user123456789 (dummy example) they are nevertheless hard to remember. Therefore I used a browser addon in the past, which would mark posts from users on my list with a red rule so I can easily notice. 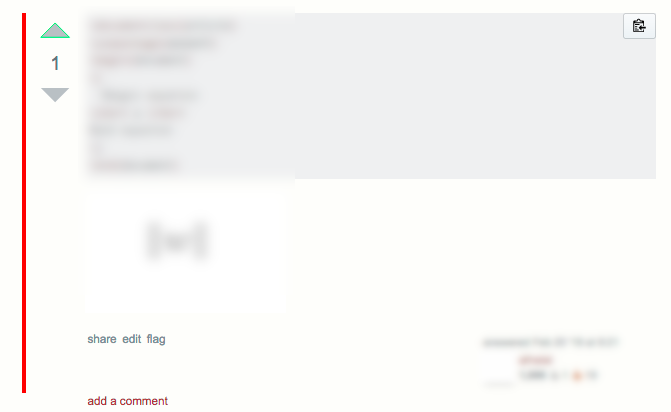 (The addon I previously used was https://bures.io/products/favorite-users/stack-exchange/, unfortunately the new "responsive" site design broke it and it no longer works for questions and causes various formatting issues)

The main effect was that I was much more relaxed. My default assumption was that every user was well behaved unless the post had a red rule besides it and if the question itself was reasonable posted it should have an answer. This made spending time on tex.se much more enjoyable.

Now in the post new design world, there is this constant subconscious fear that I might be giving answers to users from my do-not-answer-to-this-one list (which is probably my own fault because I'm often too lazy to check each and every user name if it is on my list).

Reasons against an ignore/mark user functionality

I see two main reasons why this is a bad idea

This does not address the question itself, but my opinion regarding this feature request.

I also have a list of special ones and when i encounter a question of one of these users I think Ah, it's you again.

But i don't just ignore them if i have the time.

Imagine a high-school teacher or university professor would ignore a student just because he is a pain in the \ldots.

We have to at least try to treat everyone with respect. In real life and in this limited internet part of (real) life.

I have slightly different view from what may be read between the lines in your post and the existing answers. Certainly it is not up to me to tell you what measures you may or may not implement to ignore users. However, if I understand your request correctly you feel disturbed (or even harassed) by the behavior of certain users. As I said, I do think that it is your right to automatically ignore such users.

On the other hand, who do you think will stand up to those if not high-reputation users like you?

I personally would like to argue, thus going to some extent into the direction of Henri Menke's comments, that, as long we do not have clear rules that prevent users from misbehaving in the way you describe, it is our job to micromanage these issues by contradicting them in comments, of course without using inappropriate wording and so on. Given this post, I do not think we should dump this entirely on the moderators, unless they tell us we should not interfere.

My opinion is not very strong, but I would like to argue that if these rogue users do not get moderated by ourselves, meaning in particular by the more senior users, then this may send unfortunate signals to those who are considering to contribute more to this site.

Just as a side note: This quite comes to our policies which are not quite what The Powers encourage. The standard procedure for poor posts is (1) downvote, (2) wait for edit and improvent, (3) undownvote and possibly upvote. Users with repeated negative scoring get banned eventually.

As we don't like downvotes, the balance of the ban algorithm is off. I'm quite sure I know about specific users here that would have been banned a long time ago, given we had used to follow the standard voting procedure.

I don't have a solution really, this is just a related observation, too long for a comment).

19
Proposal to add "academic honesty" to the code of conduct