There is no restriction on standing in the ballot beyond needing to be a member of TeX-sx as-of this morning (0900 GMT on 2018-01-25). In particular, the aim of the memberships here is to allow TeX knowledge to be disseminated: candidates do not have to have 'strong' TeX knowledge, 'community standing' or similar.

The first phase (nominations) will run until 2200 GMT on 2018-02-03, after which there will be a voting phase. In the event of a tie in votes, the mod team will decide which name goes forward. The mod team may also include additional names if at the end of the voting process there are fewer than eight nominees with positive scores.

The voting phase is open until 2200 GMT on 2018-02-09. Additional nominations may be added during this phase. At the end of this period the top eight names will be passed to the StackOverflow staff. (Note: at the time of writing there are nominations which have not been made 'active' as the nominees have not yet confirmed they are happy to go forward.)

At the end of the voting period, the votes were as follows:

Hesitantly I nominate myself. As “justification”, I humbly offer the following:

I (Christian Hupfer) nominate samcarter for her outstanding support regarding TikZ and beamer related questions (and other topics as well, of course) here on TeX.SE (but grossly unfortunately underrated, being a user with the most zero votes answers most likely :-( ) and for her package tikzducks (Fortunately Duck Vader is not missing any longer :-) )

@samcarter speaking: It is a great honour to be nominated! I have been elected as representative the past two years and although I'd love to continue I would encourage everybody to first vote for new nominees, please!

Did someone complain about a missing Duck Vader?

The TikZ force is strong in her...

I'd like to nominate myself because (a) Paulo Cereda suggested it, (b) I really like this community and (c) marmots are underrepresented. 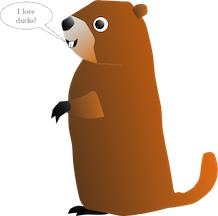 I'd like to nominate Moriambar for his significant effort to mend the \\ bug. 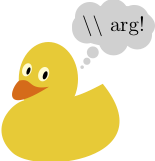 I'd like to nominate myself because I have spent a lot of time with tex.stackexchange and with explanation that TeX is not equal to LaTeX.

I nominate @CarLaTeX to be one of our TUG representatives this year.

For the voting: She was already nominated last year and wishes that you consider new nominees first.

I would like to nominate myself. I should remind you, that last year the situation was the same. I am writing this, looking at page 301 of TUGboat, Volume 38, No. 3. :-)

Although I an not a real TeX-master (much more powerful wizards live here) I would like to nominate myself for the TUG experience.

I am an Electronic Engineer and using TeX and LaTeX since more time than I like to say... my Ph.D. thesis was written in plain TeX (1992). Now I am more the sort of a middle-power user than a TeXhacker, trying to evangelize for my current University (I have taught, and sometimes I repeat it, a Ph.D. seminar about writing papers in LaTeX)...

I nominate @cfr to be one of our TUG representatives this year.

Full disclosure: cfr had been TUG representative twice -- nevertheless I think she would be a good choice for this year. 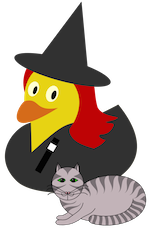 Not the answer you're looking for? Browse other questions tagged discussion tug .

60
Community effort in fixing the double backslashes issue
27
Do we need more moderators?
63
Do we want Stack Exchange to become an institutional member of the TUG?