A proposal to include a duck in our background image

Nowadays, TeX and friends are far beyond of just academic usage. I would like to propose the inclusion of a greyscale duck (courtesy of tikzducks) in our background image. This is the current image:

The following image is a concept sketch. Note how graceful the duck is when compared to the other elements.

So, dear community, should we go one step further towards quackiness? :)

I realise that, in practice, people are unlikely to even notice the duck. However, I think that the image is a statement about the community and this community's attitude to visitors, including both regular members, newbies and passers-by.

I may not be explaining this objection very well and I do not expect this post to be popular. I post it because, after considerable thought, I concluded that somebody should say it. Unfortunately, nobody else has stepped up, so the somebody happens to be me. 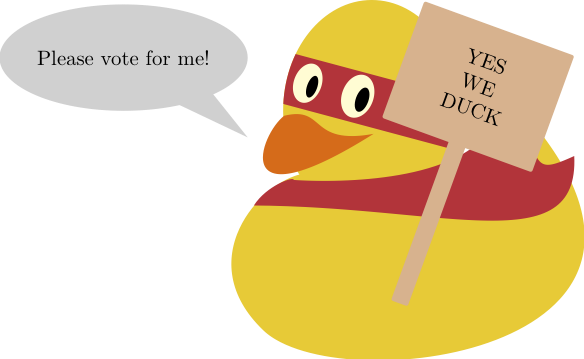 Everybody can decide for themselves

Luckily there are browser addons which can exchange the default background image by a version including the duck, so every user can decide if he/she wants to use one of these addons to have a duck in the background image.

Addons capable to do the image exchange are for example stylish or from the greasemonky/Tampermonkey family.

Instructions for firefox with greasemonkey

No way, this is far too silly!

Not the answer you're looking for? Browse other questions tagged discussion ducks .

24
Winterbash 2016 participation
11
What is the point of the ducks tag in non meta tex
8
Sign error in Eulers formula in header on front page?

12
"relation-symbols" tag proposal
75
The duck giveaway 2016
15
Proposal for rewarding former accepted answers
19
Proposal to add "academic honesty" to the code of conduct
4
How do I include a MWE?