Every time I post a link to the following useful question I cringe a bit.

I don't think everyone is familiar with the idiomacity in English of this phrase "X for idiots" or "X for dummies", and for those people we stand to sound rather patronizing, by implicitly calling them an idiot.

I suggest we change this title to be:

(I'm raising it in meta first rather than changing it directly, because not everyone might agree.)

I'm in support: a lot of visitors to TeX.SX don't speak English very well, and this makes the post's intent clearer; I also don't see a downside.

One thing which influenced my decision was that if one searches for the phrase "for idiots", the only results are "BibLaTeX for Idiots" and several links to it. If there were several such posts, perhaps the idiomatic meaning would've been clearer.

By contrast, there are plenty of results for "for dummies", including several titled "[Something] for Dummies," and I think the "...for Dummies" series of books is better known than the "...for Idiots" series.

In the very least, include a reference to the "for Dummies" series to clarify its usage. Perhaps even including an image to highlight it visually... in the spirit of being original, I mocked this up from a German version: 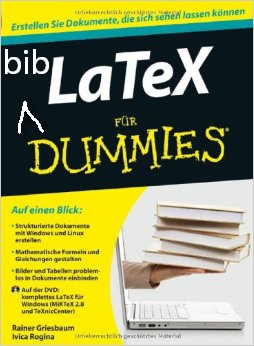 Regardless, I support the change. I think

sounds more generic, as there's probably little difference between an "absolute beginner", a "complete beginner" and a "beginner". Other options may include

5 years of display and 200 votes are not good enough evidence that it is not offensive because people probably identify this as a self-deprecation of the OP?

And from the homepage of the user, I'm sure he is aware of what idiot means.

Finally, notice that all the edits were concerned about how to spell biblatex instead of the idiots parts which was (and is-ish) one of the reasons why I spent so much time here on TeX-SX.

Not the answer you're looking for? Browse other questions tagged discussion status-completed specific-question title .

20
Should we have a wiki tag for LaTeX core?
4
Reason for closure of a question
15
Tags for Springer-Verlag classes
14
Asking for advice in choosing a package to do a particular task
51
Reviewers; what do you eat for breakfast?
31
TUG Membership: Names for 2016
6
BibLaTeX Tutorial: May I show you my example *before* publishing it
22
TUG Representatives for 2017