I am asking this purely out of curiosity: Why is there a specific Stack Exchange for TeX? There is no HTML.SE, Python.SE, Java.SE, etc. It appears to me that all other programming languages (and scripting languages or whatever you call them) are covered by Stack Overflow. While TeX is definitely quite unique among programming languages and has a somewhat different user base, I am sure that argument would work for some other languages, too. Furthermore, other languages exist with purposes similar to that of TeX. So why did TeX get its own Stack Exchange?

To understand why TeX-sx exists we need to think about the overall network aims and how sites inter-relate. I think to do that we first need a little history. The 'main site' (StackOverflow, 'SO') is about programming in general. The first sites that were created in parallel to SO (SuperUser and ServerFault, SU and SF, respectively) both have distinct audiences from SO. Whilst there is undoubtedly some programming in for example running a server, the core expertise is not the same (though the same people may be active on both).

When the 'Powers' decided to allow more StackExchange sites as part of a network, they were looking for areas that have a distinct identity and which don't directly overlap with one another. In the case of TeX-sx, there is some programming going on but also a lot of other stuff. A lot of using TeX, LaTeX, ConTeXt, etc. is not about programming in the way someone on SO would understand it. Rather, we get questions about typography, document design, etc. as well as some about TeX programming. Even within the latter category, TeX programming is rather different to many other languages and it's hard to see a large degree of overlap with many (most?) regular users on SO.

The bottom line for the existence of any site on the network is having a distinct identity where the subject doesn't form a subset of the coverage of a larger site. Over the existence of TeX-sx we have I think found that our scope is different from SO, that many good questions here would be closed there, and that this site is therefore adding to the 'public good' (or however the Powers describe it).

Note that SO does have tags for TeX, LaTeX and BibTeX and that they do have some question on them. However, they need to be pretty tightly about programming to be on-topic for SO. For example, something like adjusting the formatting of a TOC would be on-topic for us but I think off-topic for SO as it's not really a programming question.

I would note here that there have been issues with establishing what one might call 'programming-related' sites on the network as there has been a lot of tension about the degree to which they might be viewed as a subset of SO. The Programmers site, for example, deals with what one might view as 'conceptual' ideas about being a programmer, and so is regarded as distinct from SO, but there are borderline questions.

TeX - LaTeX followed the regular Area 51 proposal process to get where it's at today.

How do I start a new site?

If your area of expertise doesn't already have a Stack Exchange site, propose it! Stack Exchange sites are free to create and free to use. All we ask is that you have an enthusiastic, committed group of expert users who check in regularly, asking and answering questions.

The creation of Stack Exchange sites is a community-driven process. That does not mean the majority of Area 51 users have to love your site idea. It simply means you have to recruit a community of users large enough so that questions get good answers quickly. Reach out to other experts to build support for your site; bloggers, enthusiasts, and support groups can all benefit from a world-class, canonical collection of expert answers to the hardest questions.

If the proposal wasn't going to work, it would have been stopped during this proposal process.

The following may also have been a consideration:

Should my idea be part of an existing site, or its own site?

In general, if a site makes sense as part of a bigger site, it's better to have one big site than a bunch of little niche sites. Site X should be subsumed by site Y if:

For more information, read the post Merging Season on the blog.

While some of the above suggestions might be true, not all of them are. As such, there may have been enough incentive to break free. Our scope is also somewhat broader than purely programming. That's supported by the fact that TeX - LaTeX performed really well during the three-step graduation: 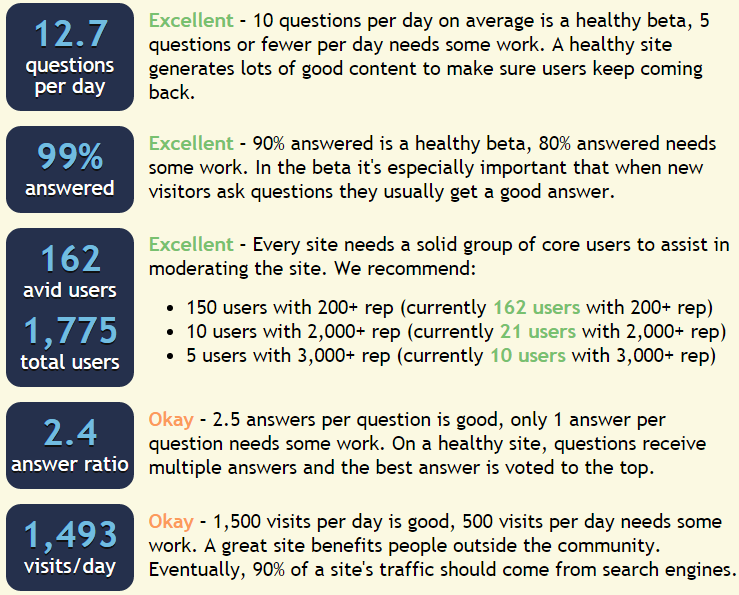 It showed there was enough interest to break free from the catch-all programming of Stack Overflow.

In my opinion, suggestions like Python.SE, Java.SE, HTML.SE would not fit based on the following criteria: "In general, if a site makes sense as part of a bigger site, it's better to have one big site than a bunch of little niche sites."

Not the answer you're looking for? Browse other questions tagged discussion scope stackexchange .

7
Why not use Stack Overflow?
12
Are questions about TeXmacs on-topic?
20
how to "extract" a good question from someone coming from a google search?

23
Which is more common: "TeX.SE" or "TeX.SX"?
15
Is the following a suitable question for TeX.SE?
29
Does Donald Knuth have a profile on TeX.SE?
42
Why does TeX require such elaborate MWE:s
11
Why does downvoting reduce my own reputation?
19
Proposal to add "academic honesty" to the code of conduct
12
Adapting the highlighting colors for the new highlight.js version
17
What's up with the current monthly rep point totals on TeX.SE?