I read on the help page

Should I be concerned about reversal statements on my profile?
No, not at all. It's only an indication of reputation change. After all, we can't control the actions of other users. It's very rare where we'd run across a user who was committing the voting fraud themselves on their own account, and in most instances of that, they will have already been dealt with accordingly. You should in no way be concerned with reversal statements in your reputation history.

Actually NO reputation has been lost, so the figure shown for the current day is blatantly wrong. Here is a screen shot for the last days (and the serial upvoting has surely happened between the shown dates) 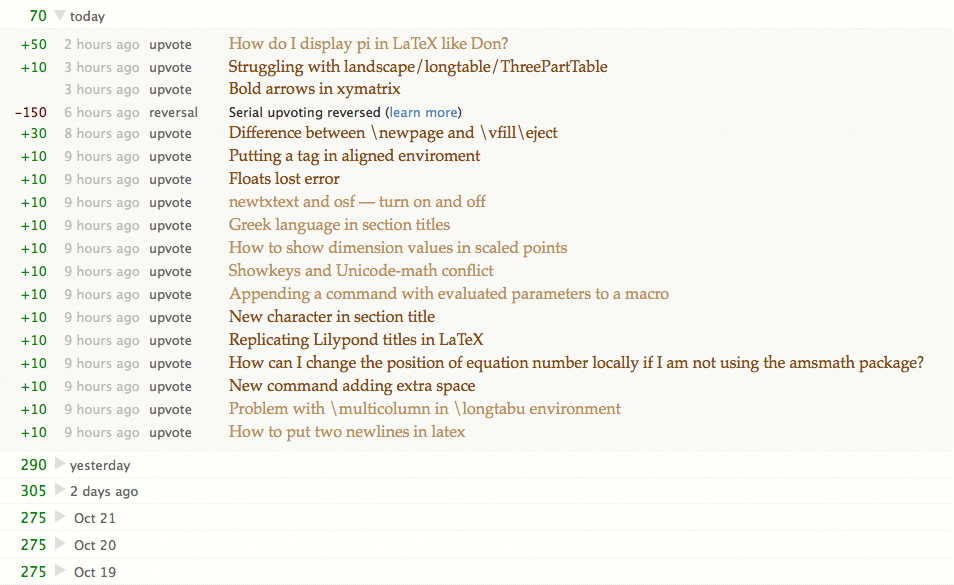 My current reputation for the day is 210, not the absurdly ridicolous 70 that's shown.

So there are two cases: either the figures shown for the preceding days are wrong or there's a bug that seems to allow me getting over rep cap for the current day.

The serial-voting reversal is posted as part of the reputation calculation for the day in which the reversal occurred. However, it may reflect the reversal of votes (and therefore also reputation) of previous days.

For example, assume user ABC serially voted on your post on two separate days. X reputation on day one, and Y reputation on day two (let Z = X + Y). On day three, the reversal detection algorithm is ran (every night around 03:00 UTC) and finds Z reputation is suspect and should be reversed. StackExchange's reversal doesn't remove X from day one and Y from day two. Instead it's sufficient to leave the reputation for days one and two untouched, but remove Z from day three. Quoting from What is serial voting and how does it affect me?:

The mention here of reputation is only for what is lost (through down-votes), not gained. You only gained reputation (through up-votes) and therefore there is no reflection of reputation change other than the combined serial upvoting reversal.

I would assume the problems associated with this approach is fairly minimal. If badges were awarded based on the serial (up)voting, they won't be retracted anyway (as badges are never retracted).

Not the answer you're looking for? Browse other questions tagged support reputation voting serial-voting .

41
Serial upvoting reversed
11
What will happen if a serial-upvote reputation is lately reversed for this scenario?
22
Why didn't this obvious voting fraud get reversed?
5
System miscalculates reputation when determining if reputation cap is reached?
18
source of chronic serial upvoting that affects (afflicts!?) some highly-rated contributors