The Erdos graph for TeX.SE

In the Erdös graph for TeX.SE two people are connected if they have contributed to (asked or answered or commented on or edited) the same question.

Are the data available in a form that makes an answer possible?

Edit towards an answer, prompted by the comments.

If the average number of answers per question is A then each question will generate (on average) A(A+1)/2 edges joining vertices (users) in the graph (counting self-answers, not counting comments or edits). This allows multiple edges between vertices (which happens frequently on TeX.SE).

There are about 43000 questions and about 32000 users. Since each edge joins two vertices (users) the average valence of a vertex (user) is about

I'd guess that A is between 1 and 2, which implies an average valence between 3 and 8. Of course the distribution is far from uniform!

Whether or not to count comments or edits as creating a connection could be easily explored by tweaking the software that builds the graph input from the database.

A database query generating a 43,000 line csv file with one line for each question listing its asker and answerers would provide all the data needed to build the graph. Since I don't know SQL I can't follow up @texenthusiasts hope that a new query at http://data.stackexchange.com/tex/query/new might provide what's wanted.

Thanks for the pointer to the XML data dumps, @Charles Stewart. I used the June 2013 data dump (formerly here: http://www.clearbits.net/torrents/2141-jun-2013) and extracted the tex.se portion into a MongoDB database instance for easy querying. The dataset consisted of over 103K Post records and 27K User records. Every post has a type associated with it. The Post types we're interested in for this problem are "Question" and "Answer". There were over 40K Questions and 60K Answers in this dataset.

With these Question and Answer posts, a graph can be constructed, connecting two users from the dataset with an edge if those users contributed to the same question (by either posting the question or posting an answer to the question). This can be thought of as a co-authorship network. Once constructed, this co-authorship graph consisted of 13775 vertices and 67002 edges. For the sake of analysis, I only worked with the giant component (which I'll call "the graph" or "the network" from here onward). Some of the basic statistics of the graph are listed here:

So Ethan's guess above was pretty close to the actual average degree for the network. The negative assortativity coefficient is interesting: in academic coauthorship networks (and other social networks), we usually see a positive assortativity measure, which indicates that network "hubs" tend to connect to other hubs (see http://prl.aps.org/abstract/PRL/v89/i20/e208701). The tex.se network exhibits the opposite tendancy: hubs tend to connect to "smaller" nodes. This property is probably desirable for this setting - it means that the more experienced TeX users in the community are interacting more often with the less experienced members, presumably helping to spread their knowledge throughout the community.

The Degree Distribution for the graph follows an approximately power-law distribution. Using the python power-law fitting package, a fit was obtained with alpha = 1.93 for minimum degree 4. The distribution looks like this: 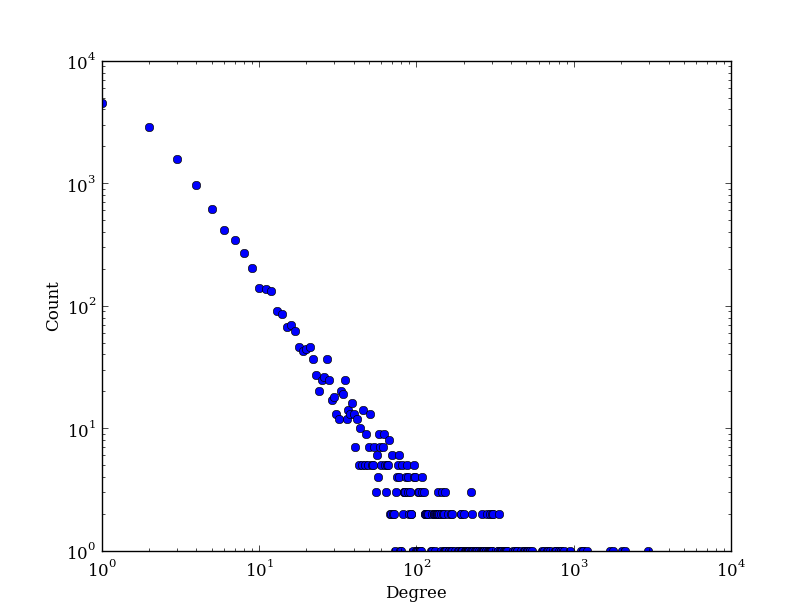 We can also look at who the users with the highest degree are; the higher the degree of the user, the more posts the user has participated in as a "co-author". The top 20 users in the tex.se coauthorship network by degree are:

For the sake of fancy visuals, the graph looks like this, although it's hard to draw much from this view (the nodes are colored and sized by degree, so the bigger and bluer a node is, the higher its degree): 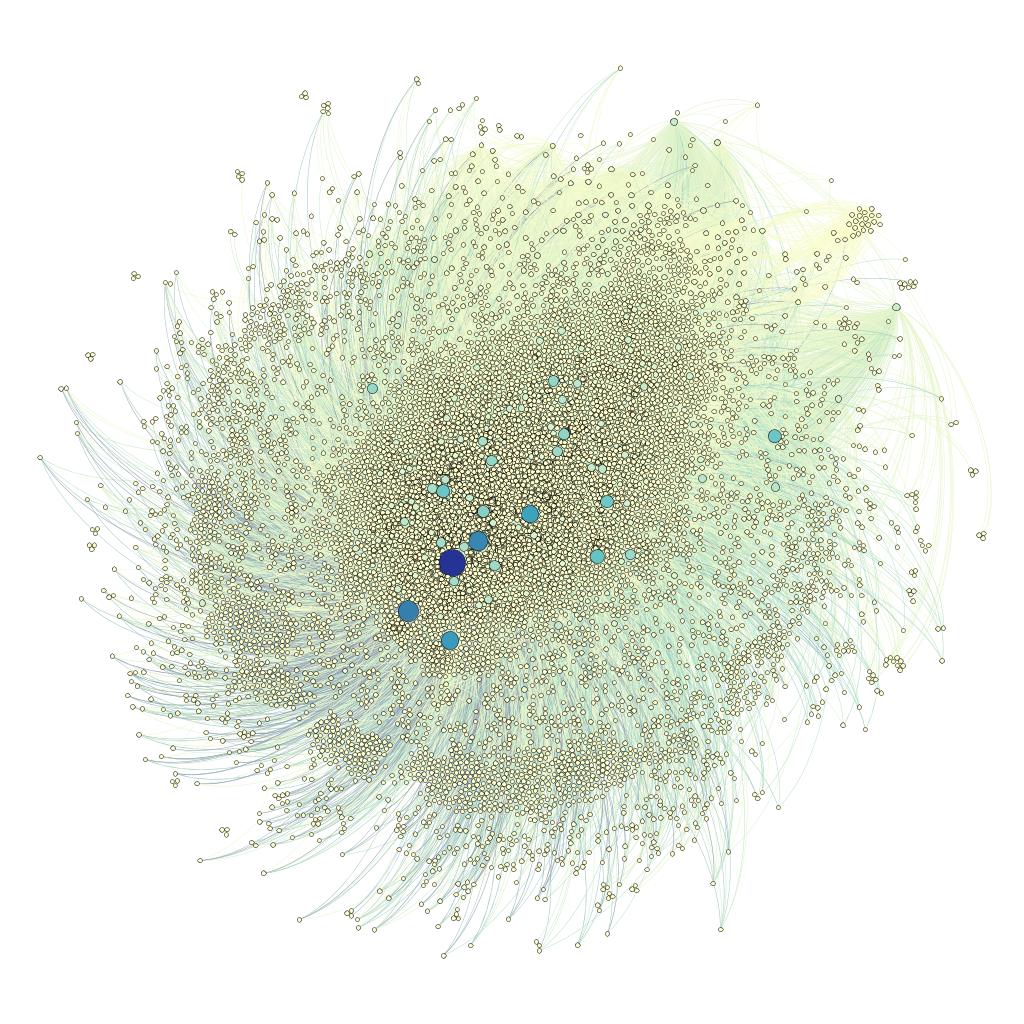 I'm currently working on some more analysis, so helpfully a better "global view" of the tex.se network will be coming at some point in the near future, along with some other interesting findings. Thanks for reading, and thanks to Ethan for posting a fun question!

There are other options:

Not the answer you're looking for? Browse other questions tagged discussion statistics users data-explorer .

7
Tag wikis for graphics-related tags
10
Site usage statistics
18
How can we explore the content of TeX.SX?
16
Community statistics
0
There is no place for justification in online media?
61
Why do (top) users on this site have such high reputations?
17
Will there be an official "What's new in TeX, version 3.141592653?" question to go along with the 2021 TeX tune-up?