This issue is now solved. From IOS6 (dec 2012), Safari has access to the camera roll, so it is possible to upload images directly from Safari without the Dropbox workaround. That is, I can follow the steps 1 and 2 of the original question, and then upload it directly to StackExchange.

I leave the original question and its edits for reference.

Currently I am far from my computers, and I've got a lot of spare time, so I'd like to participate in this site and answer some questions, using my iPad.

I've found that the site is very iPad friendly, and that I can navigate, read and write answers without problems (specially if I use an external bluetooth keyboard, which make more accessible the markup symbols).

However, when I want to try out the code in my answers and post an image with the resulting output, I get into trouble. These are the steps that I'm currently using:

This is how I answered Drawing node in tikz with both background fill and grid pattern?, for example. I wonder if there is a shorter method, or if I am the only one trying to do such a thing from the iPad.

The reason for such a convoluted process is that in iOS (iPad, iPhone and iPod operating system) the filesystem is sandboxed for each application. In other words, an application has not access to the files created in a different application. The user has no control about where the files are stored. When you "download" an image with Safari, it "sends" that image to Photo Album app, which stores it in its private filesystem. But then, when some web page offers you to "upload" a file, Safari dismisses that option, because the only part of the filesystem that Safari can read is its own private space, and this is use for caching only. This is why I have to use Dropbox as an intermediate store.

However perhaps an iPad user more skilled than me knows about some workaround. It is a pain to be unable to upload files from the browser.

[Answered from my iPad]

A shorter workflow is to submit screenshots rather than the actual pictures. You take a screenshot by pressing the "home" and "power" buttons simultaneously. The screenshot automatically goes to the camera roll, which can be directly accessed from Safari--it's the only thing you can get to from a conventional "upload" menu. 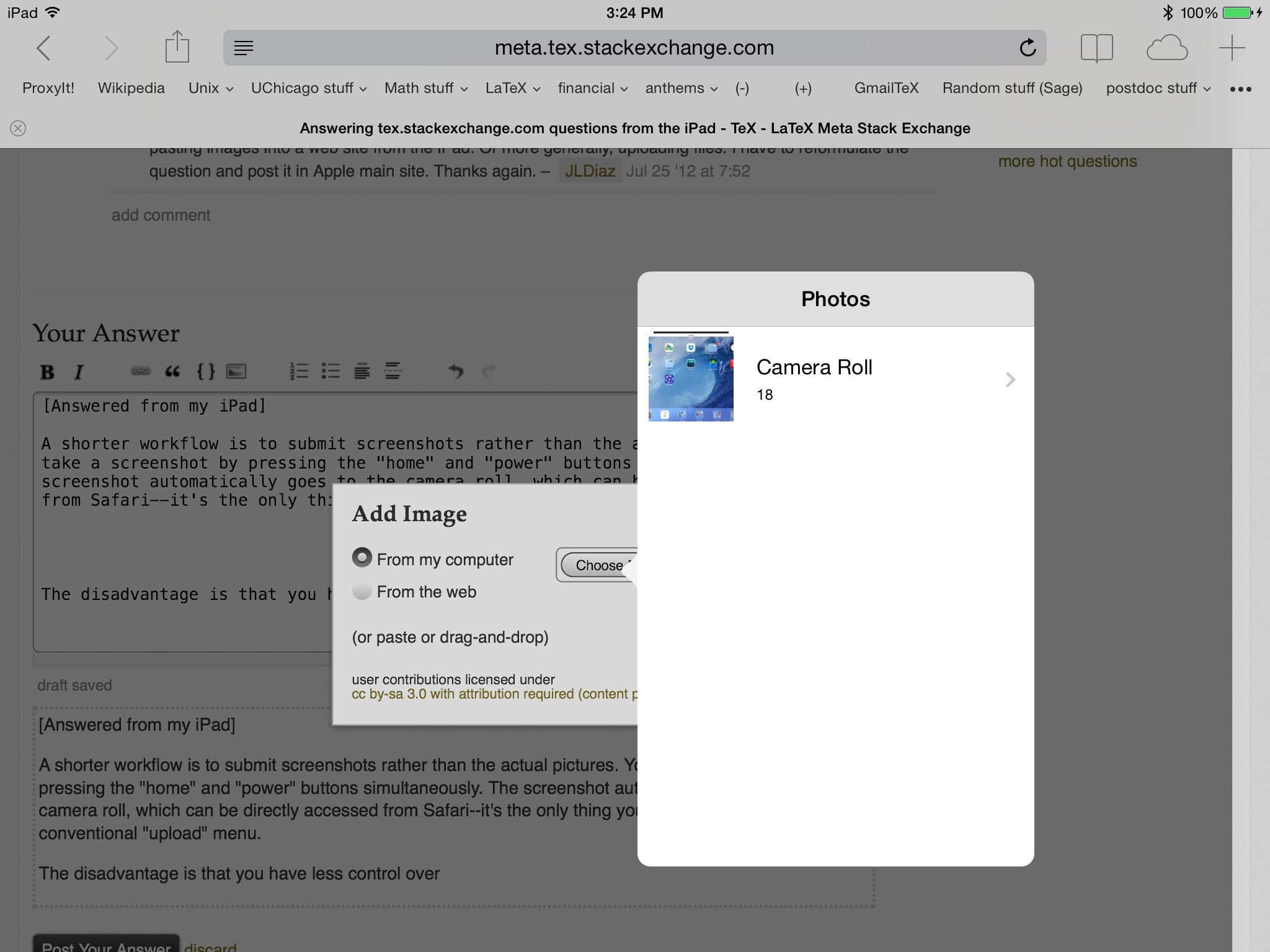 The disadvantage is that you have less control over exactly what shows up in the picture.

Not the answer you're looking for? Browse other questions tagged discussion images mobile .

9
Where should images go?
16
How to tag questions specifically about the classic DVI-producing latex compiler?
21
TeX.SX T-Shirts
4
Style of typesetting images in questions/answers
3
imgur image hosting
3
Uploading images with blur shadows
15
Our new ad series
1
How to post questions with LaTeX code? latex2html?