Do we want more migration paths?

When you're voting to close a question as off-topic for tex.sx, the question might still be on-topic for one of the other 84 Stack Exchange sites (as of April '12). If four out of five 3k users voting to close (or a diamond mod) vote to migrate a question to another site, it is migrated there. Currently, you can only migrate questions to meta.tex.sx because there aren't any other migration paths. We could, however, have up to four more migration paths, which would look somewhat like this: 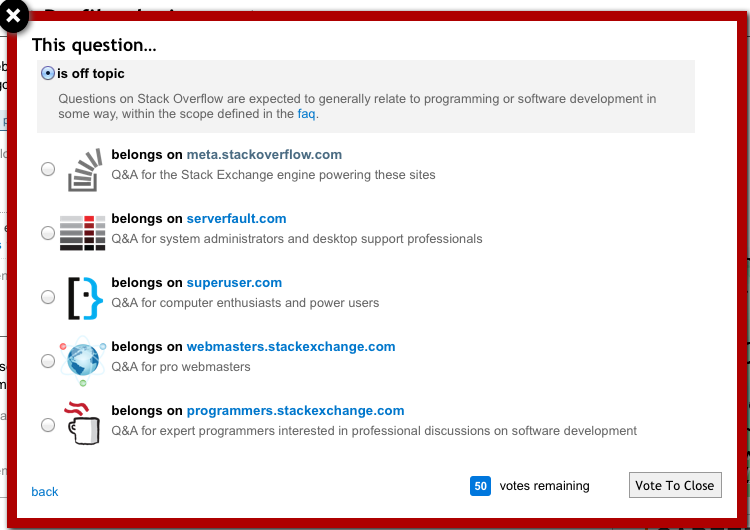 While we don't migrate off-topic questions very often, I think we could do so much more often, whilst bearing in mind the first rule of migration: "Don't migrate crap." (Which gets an amusing 1,700 hits on Google.)

I'll put some options in the comments for you to vote upon, and we'll see where this takes us. Feel free to add more options.

I think (diamond?) moderators can access migration statistics (I saw some on MSO) -- could one of them perhaps edit in our migration stats here?

Oh well, they didn't like it and migrated it back here, where the chance of a SE dev helping with the process of finding appropriate migration paths are much lower. Looks like we need individual answers for the option. Also, could someone with the necessary powers please provide us with some migration stats? It'd be pretty bothersome if we had to go through questions by hand.

Not the answer you're looking for? Browse other questions tagged discussion feature-request migration .