It's the obvious question: TeX/LaTeX isn't all about design and typography, but -- shall we say -- the conversation does tend that way quite often.

Good design is first off about being functional (function over form, and all that), but I think a site like this can perhaps get away with being more obviously, or more self-consciously, stylish than others in the same stable.

Myself, I'd go for wall-to-wall Helvetica and oodles of white space. But opinions may reasonably differ.

Another idea, as TeX is all about care for the smallest typographic detail, it would be nice if "quotes" would automatically typeset educated “quotes” instead of the boring "quotes".

IMHO these are the main goals behind TeX typesetting, hence these qualities should scream. It would be amazing to generate all graphics for the website using *TeX.

For example I like http://www.texample.net/tikz/ because it has nice curly graphics, sharp aesthetic lines and TikZ related line decorations.

I actually like the current construction paper look very much. If at all possible, I’d propose using it for the final site. There may be no direct connection to TeX but there is one to layout and design.

What's the status on web fonts? Latin Modern would be an obvious font choice, given its ubiquity in LaTeX documents, assuming there's a portable way to make it available in visitors' browsers.

Playing with the Developer Tools in Chrome I just edited the css of the site to change the font to Helvetica. It does look nice! 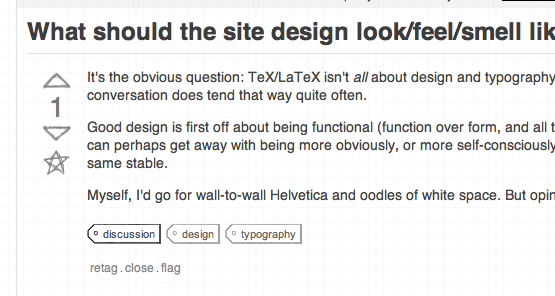 I know that this has been discussed in other posts, but I would like to see MathJax, or equivalent, enabled on TeX.SX.

The arguments against seem to be that MathJax etc don't support all of TeX and that on this site we actually want to see the code, but I don't buy this. Currently to display the "raw tex" input we type ...raw TeX... or we indent the code. On the other hand, MathJax only operates (or could be made to operate) with the different markup of $...raw TeX...$ or $$...raw TeX...$$.

As far as I can see there is no conflict in having MathJax convert basic TeX commands such as $\alpha$ to something that is friendlier to the eye --- clearly, we won't want to be able to display arbitrary TeX commands this way -- and using backticks and indentation to display the underlying code. Why can't we have the best of both worlds? Especially given the comments about beauty above!

Judging from other posts, mine is a minority viewpoint. That's OK, I am happy to agree to disagree.

Not the answer you're looking for? Browse other questions tagged discussion design .

20
What should our domain name be?
29
Site Design Ideas (updated with mockup)
52
Why doesn't maths render as maths?
-1
Augment the markdown syntax with some lightweight TeX-ish conventions

5
Is SE the right platform for the meta site?
29
Site Design Ideas (updated with mockup)
24
What should the policy be on typography/design questions?
13
Package dependencies in answers
17
Can someone explain the homepage new look?
29
Site design updates are live!
15
Is a showcase of preambles off-topic?