Why doesn't TeX.sx use TeX fonts?

Every day, I make my rounds through several of the SX sites, and I continue to be impressed by how beautiful TeX.sx looks compared to the others I visit. I've always wondered, though, why a site devoted to TeX doesn't use TeX fonts. I feel like it ought to, if possible.

I've been working a lot lately with the Latin Modern collection (derived from Donald Knuth’s Computer Modern font collection) and have had great success getting them to work in HTML via CSS. The results are so close to actual TeX, in fact—right down to the ligatures and the TeX, LaTeX, and XeTeX logos—that I can’t tell the difference anymore without scrupulous examination.

Below is a sample page showing what TeX.sx could look like using TeX fonts. The image is actually a hyperlink which brings you to a web page that displays the content shown in the image. The image is not faked; it’s an actual browser screenshot.

I want to be careful not to step on any toes here, but I also want to demonstrate what is possible with modern HTML+CSS and suggest that a reskinning of TeX.sx might be something worth considering.

The web page shown here renders identially in Safari, Firefox, and Chrome on Mac OS X, and even displays properly on the iPhone and iPad. It also should work the same on Linux and Windows as well, although I haven’t a way to test those. 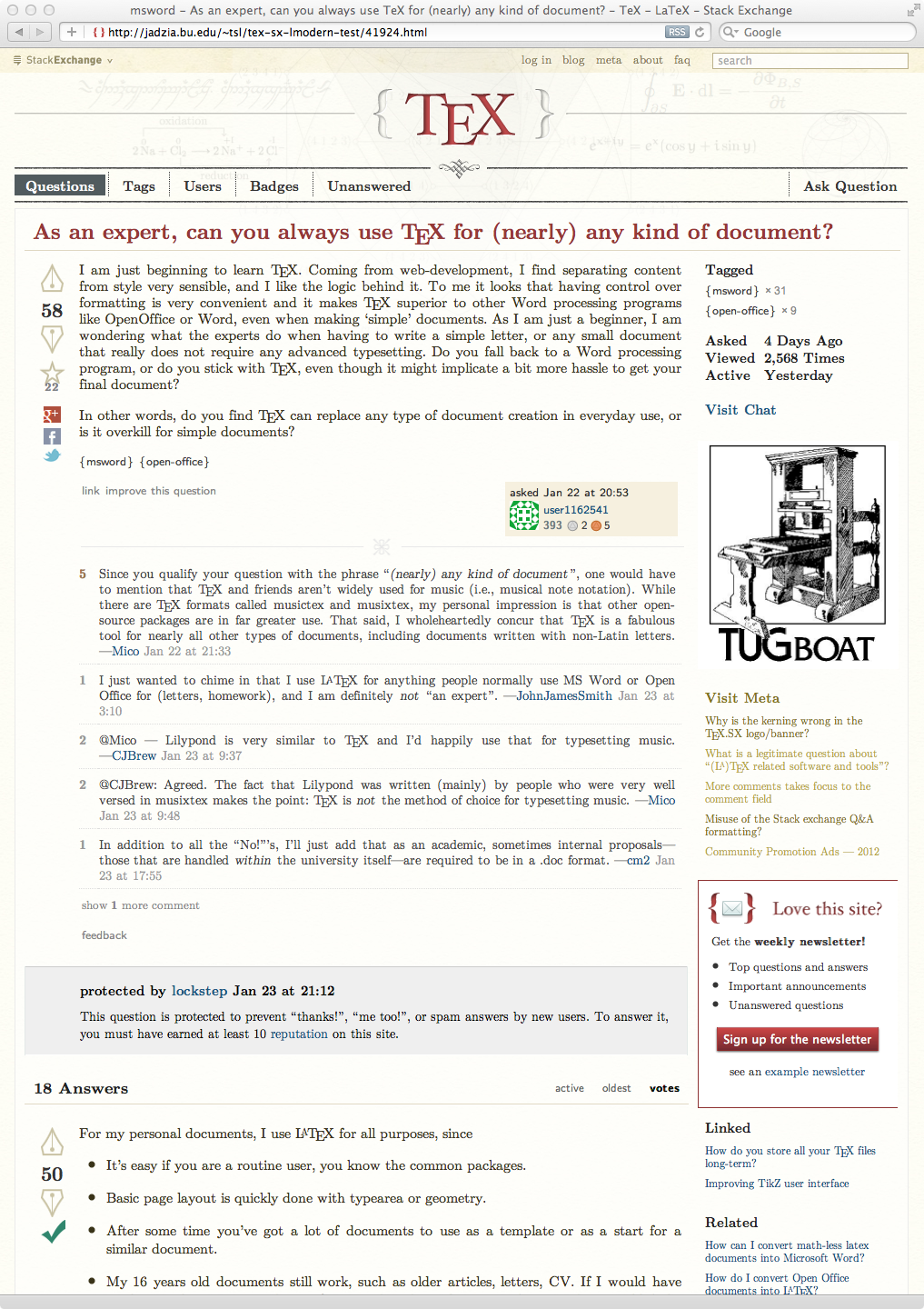 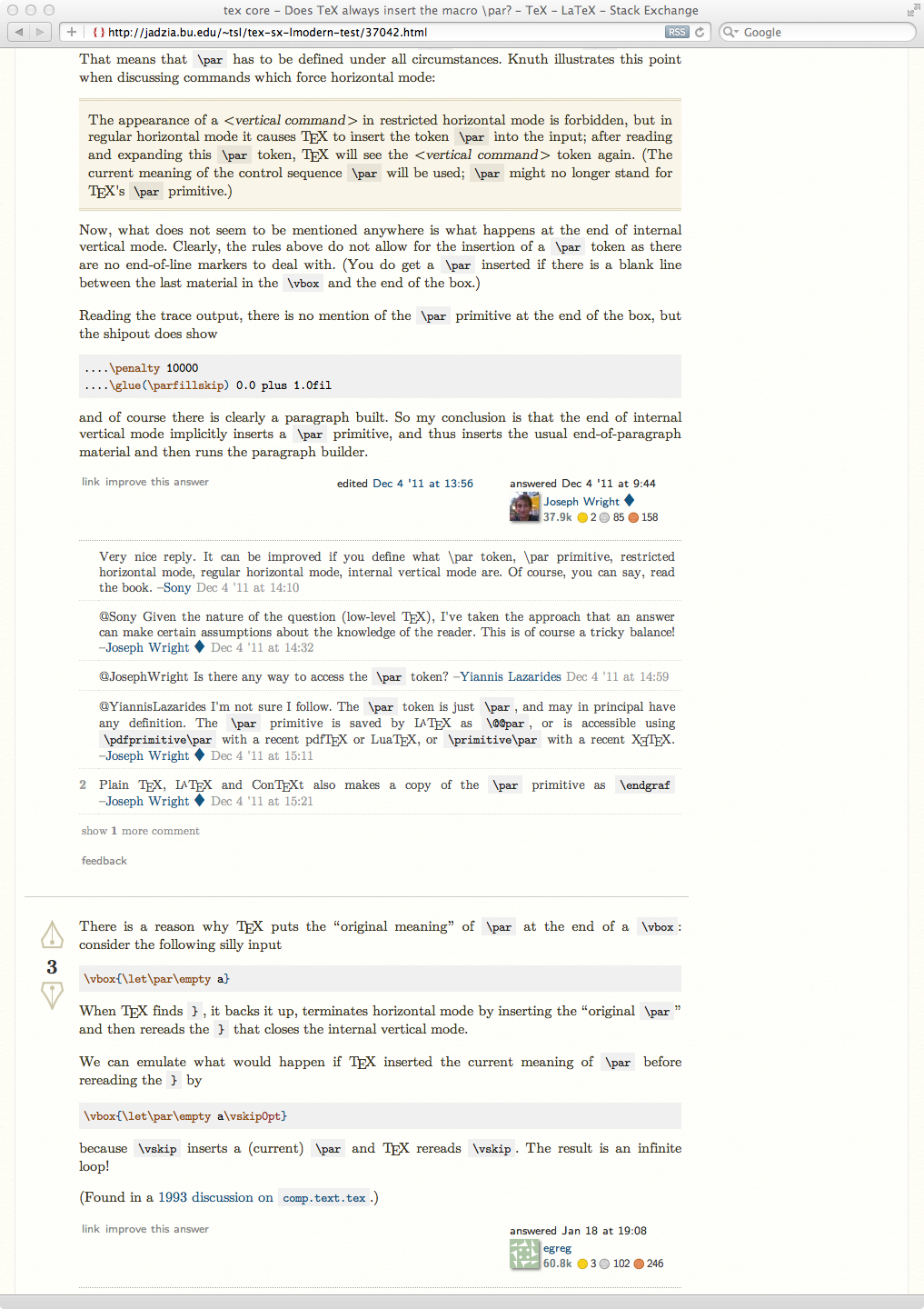 I see a few issues. As has already been mentioned in a comment, CM is rather 'light' on the screen: Knuth allowed for the bleed in printing when designing the font, but that makes it a not-so-good choice on screen. More generally, I feel that sanserif fonts probably work better, particular on smaller screens. Secondly, the 'LaTeX always uses CM' approach is something of a problem: you can have too much of a good thing. Finally, to me it is immediately obvious that something is 'wrong' when using CM without using TeX to lay it out. Web browsers don't get the line greyness right, and some of the spacing therefore jars badly. That stands out more with CM than with other fonts as I'm used to CM being 'right'.

This is how your example site looks for me in Chrome 16 on Windows 7: 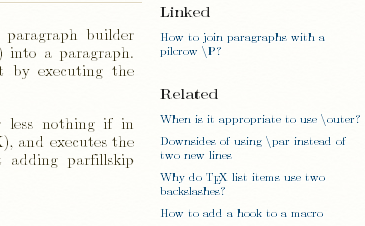 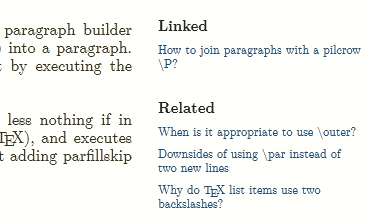 That is at 100% zoom, and it's very hard to read. I guess that getting this to work cross-browser and cross-platform is a pretty tough job.

Not the answer you're looking for? Browse other questions tagged feature-request typography fonts .

0
There is no place for justification in online media?

18
Do we want the “spoiler” feature turned off?
22
Use dashes in page titles instead of hyphens
11
Should we use a standard response about sticking to defaults for mathematical typography?
21
Position with regard to unlicensed fonts
6
Why can't TeX.SE compile my TeX code?
3
Why there is no showcasing tool for TeX?