What does the text around the title say?

This is a silly question, but if I don't ask it, it will bug me. I can recognise most of the text around the TEX title, except the elvish in the top right hand corner. What does it say?

The translation of the (complete) Elvish text is:

One ring to rule them all, one ring to find them, One ring to bring them all and in the darkness bind them.

It's the inscription of the One Ring, in the site design we can see the first half of it.

The Elvish text at the top left of the site design

is the first half of the inscription on the One Ring: 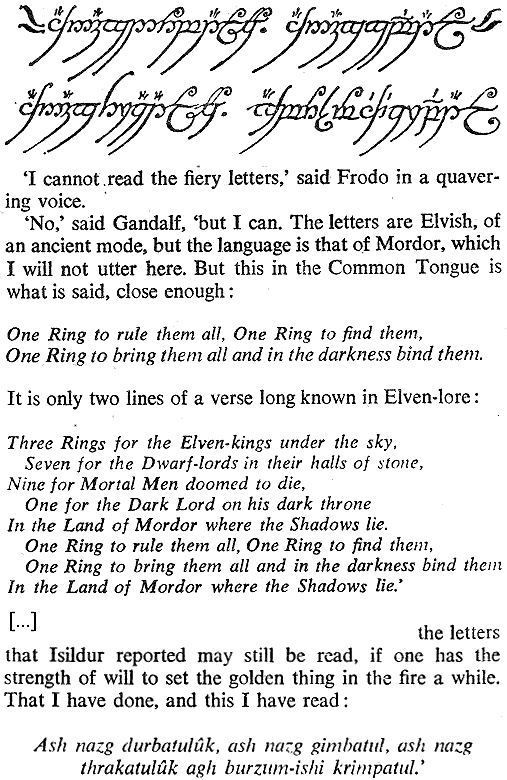 See Site Design Ideas, the TeX showcase, source tengwar.tex and compilation result tengwar.pdf. About how to create it with TeX see tex.stackexchange.com/questions/13015/what-package-allows-elvish-in-tex.

The language is "Black Speech", the letters are "Tengwar" (Elvish). This is similar to writing "Γρεεκ λεττερς" with Greek letters but using English language (in Latin letters: "Greek letters").

"Black Speech was the language created by Sauron for his servants in Mordor. Over the centuries many of the Orcs developed their own dialects of Black Speech, these dialects were often referred to as Orkish. The Orcs were not a very literate group, so few examples of their writing exists today. Those few Orks that could write used the Cirth alphabet. Tolkien included one example of written Black Speech in the book "The Lord of the Rings" - the Ring inscription. This inscription seems to be unique in that it uses the Tengwar alphabet. Sauron apparently adapted the Tengwar script of Eregion for writing for Black Speech. […] Writing Black Speech with Tengwar: The rules for writing Black Speech with Tengwar is similar to the Sindarin Tengwar/Tehtar Mode. Although the Black Speech and the Sindarin Tengwar/Tehtar modes look similar to each other, they may use different Tengwar letters to represent the same sounds. This is particularly noticeable with the phonetic values assigned to the Tehtar marks used for the o and u sound, which are reversed."

As for the rhyme of "bind" and "find" also in Black Speech as noted by Mark S. Everitt: Some say that Orcs were created by corrupting Elves (e.g. en.wikipedia.org/wiki/Orc_(Middle-earth)#East_Elves_.28Avari.29 ), which the Elves deny, of course. Now one just needs to find out whether English is derived from Elvish or Orcish. ;-)

You could also be interested in the coming The Hobbit movies and rpg.stackexchange.com.

8
First FAQ section: What kind of questions can I ask here?
9
what is the best way to announce a bug found in tex-related software?
23
Are we starting to get homework questions?
10
What exactly do we believe about Community Wiki posts?
12
What to do with the solved questions concerning a mistake not linked to the question?
9
Can I ask a “Comment my macro” question?
15
Questions which are bug reports, revisited