Just recently, Joseph Wright blogged about One year of TeX.SX, with the evident display of Yearling badges that subsequently followed on the TeX.SX side bar. As a fairly new user to TeX.SX, I've also pursued to be an active member of the community. I was amazed at the number of questions that have been asked, the amount of answers that flow in (even on older questions) it is amazing to see the amount of new users joining the community in order to learn from the experts. Heck, there's even recent talk about a TeX.SX T-shirt campaign! All this activity through posts, answers and reputation made me think that there was some form of usage statistic available to browse. Not that I've found...

Since the initiation of the site beta, there has been interest in its progression via statistics, like the number of

However, the interest in this seemed to have aged with the anticipation of emerging from beta to the current site. These usage statistics would be helpful to new users, or even just for the sake of comparing it to other forums as a form of promotion. As a reference, the Usenet forum comp.text.tex provide users with some form of usage statistic - in the form of posts-per-month* - on its about page: 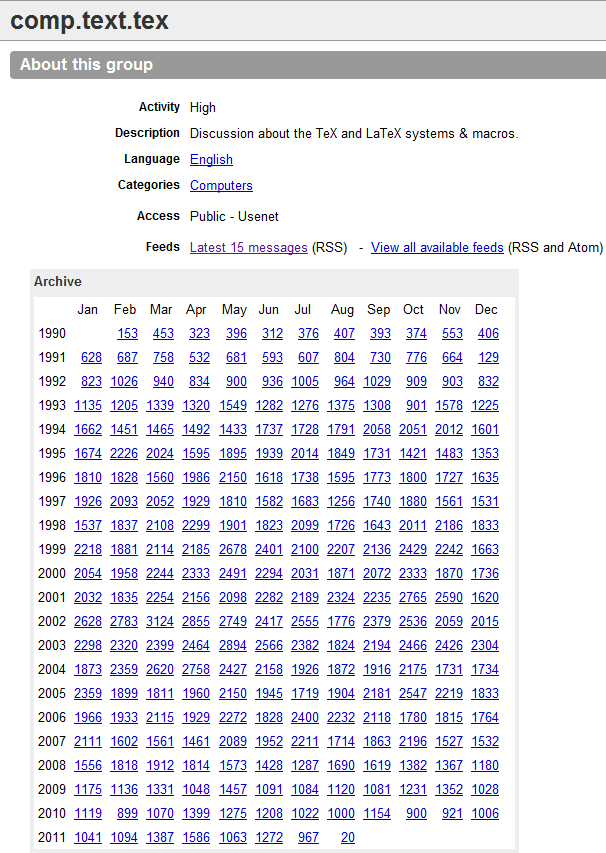 Although some statistics are already available (like the total number of questions asked, or counting the number of a specific badges awarded, tag counts, the number of unanswered questions and even weekly/monthly/quarterly reputation leagues, to name just a handful) there is nothing available, on demand, to the extent posted during the beta phase as far as I know..

* Since the site access is public/Usenet and therefore unmoderated, these totals may include spam.

You could use the Stack Exchange Data Explorer for TeX.SX to get statistics about the site. Stack Exchange dumps the site's data regularly and you can run arbitrary queries on the dumps.

There's a lot of ready to use queries such as questions per month, questions and answers per weekday and time of day, top questions/answers/users/tags, and many many more. You can even get statistics on your own user account, your reputation and badge progress.

There are basic site stats at http://stackexchange.com/sites?expand=true.

The sidebar of the reputation league gives some information about the change in the user base over the selected period (time selection is at the top of the page).

There are various pieces of data available to the moderators, but we are asked not to share specifics. I guess that this has something to do with the commercial requirements of the StackExchange network: somewhere, money has to be made and the potential advertising spread is therefore commercially-sensitive. (I've no idea how that overlaps with the data dump: I guess that the same information is available, but as we can see it 'pre-processed' it is more valuable.) That said, I think we can make general statements. So for example in the last month there were over 850 questions asked, and over 1400 answers given. We don't get too many 'bad' questions or answers, so both of those should be representative.

Not the answer you're looking for? Browse other questions tagged feature-request site-promotion community reputation statistics .

21
TeX.SX T-Shirts
18
How can we explore the content of TeX.SX?
2
Where can we find statistics about the site's progress through beta?

19
Promoting TeX, LaTeX and friends
26
Should SO's "50 questions per month" limit be enabled at tex.sx?
26
The Erdos graph for TeX.SE
16
Community statistics
61
Why do (top) users on this site have such high reputations?
35
Will there be TeX.SX Documentation?