Where did my extra reputation come from?

I suddenly got 2 points of extra reputation:

But looking at the itemized display, it doesn't appear (image from the same time.) 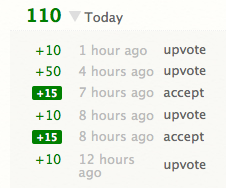 I think Stefan's comment "Perhaps somebody removed a downvote, which would add +2" is the best answer you can get. I tried to verify Stefan's explanation, but that might be impossible:

My first thought was that it should be possible to see from the timeline of the posts you contributed to if there was a downvote retracted. Now I had a look at the timeline of one of my questions. I gave a self-answer that got 1 upvote and 1 downvote on 22 September (the latter one can see from my comment), but the timeline shows 2 upvotes on that day! (The unsatisfactory explanation: The downvote was changed into an upvote, but that happened months later.) So unfortunately the timeline doesn't help here.

The reputation count is not guaranteed to be always 100% accurate. Did you removed any down-votes? Did you recalculated your reputation, because then you get previously lost points on down-voted but now deleted questions back. This points don't show up in the 'Today' section.

Have a look at the reputation audit page https://tex.stackexchange.com/reputation (the last day is on the bottom) and check the number there. You can use the button there to recalculate your reputation. Then the number should be correct.

I think you've got those 2 points because you suggested an edit which has been accepted, and this is not listed in the detailed display.

Not the answer you're looking for? Browse other questions tagged support .

11
Hunting for the Critic badge
11
Where are the meta-accounts of a user listed?
27
how can i upload an image to be included in a question or answer?
11
Total vs. year reputation?
16
Reputation for retagging
7
What is the best method to capture latex output for questions and answers?
5
System miscalculates reputation when determining if reputation cap is reached?
11
When is awarding bounties considered a misuse of the system?
3
Why do I have a reversal If I'm not very active?